AFC Champions League Round Review (Round of 16) 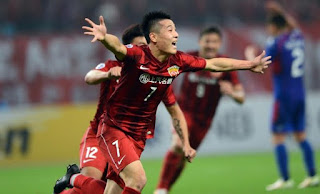 The knockout stages of the AFC Champions League began in similarly enthralling circumstances to that of the group stage culmination earlier in the month, producing 4 debutant quarter-finalists in matches that included a penalty shootout victory for Seoul over Urawa Reds, last gasp winners for Chinese duo Shandong Luneng and Shanghai SIPG against Sydney and Tokyo and an enthralling near comeback which eventually saw Al Nasr edge Tractor Sazi. Elsewhere El Jaish put six past their domestic rivals Lekhwiya, Jeonbuk Motors turned on their vast experience against Melbourne Victory, Al Ain stunted Zob Ahan’s fantastic continental campaign, while Lokomotiv Tashkent defied the history books to succeed over West Asia’s most successful team in Al Hilal. Picking out the individual star performers, here’s a look back at the winners from the past fortnight.

With defending champions Guangzhou Evergrande and big spending Jiangsu Suning falling at the first hurdle in the ACL group stage, assumptions that the Chinese Super League would immediately dominate the continent threatened to fall flat even before they had begun. In the end the CSL needed two last minute winners to ensure they even had participation in the quarter-finals, a further two exits would’ve no doubt seen questions being fired at the league once more merely a month after their perceived group failure. While the foreign imports have been the league’s main head turners in the past few years, both winners were scored by home born stars, Wu Lei of Shanghai SIPG in particular is demonstrating that Chinese players are more than just team filler.

His two goals over the fortnight were SIPG’s only efforts, his away goal in Tokyo in the first leg ultimately being the difference to inch Shanghai over the line. The goals weren’t glamourous by any means, but they were predatory, initially latching onto a pass across the box in the first leg, before responding quickest to a goalkeeping save in the second. These were far from what we’ve grown accustomed to from Wu since his introduction onto the domestic and national stage. His positional variety has matured immensely since his transfer to SIPG last year, previously seen purely as a modern day link between midfield and attack, Wu has harnessed his physicality and range of abilities, to slot in on either flank or even flex around into a capable central striker, as both of his goals attest to.

Alongside Elkeson, Dario Conca and Asamoah Gyan, Wu is the fourth wheel in SIPG's devastating attacking vehicle, which hasn’t been deterred but seemingly improved since Gyan’s injury of late. His form domestically has mirrored his compatriots, however it’s been in Asia that Wu’s really stood out from the pack scoring 8 goals in his 7 matches, only missing the target in two of his games. His goals as indicated above have demonstrated Wu’s varied ability across the attacking line; typical cool striker finishes (v Suwon in March) one-twos in close proximity (v Gamba in April), finishing on the volley, shooting from distance after bursting forward from deep (both v Muang Thong United in February) and of course the predatory (v Melbourne in February & his double against Tokyo this month). Wu’s making a great case to become the player of the tournament already, and he’s far from done yet.

If you’d been pressed to predict a side that at the quarter-final stage would remain unbeaten, I’d hazard a guess you wouldn’t have picked Lokomotiv Tashkent, let alone anyone from the Uzbek Pro League. Eight matches in however, and the Uzbek Railways owned club continue on like the metaphoric train on their emblem after defeating Saudi giants Al-Hilal in the Round of 16. Years of heartache for Uzbek football seems to be finally turning a corner, with Loko going further than any Uzbek club since Bunyodkor’s famous semi-final run in 2012.

Their success which has been a story of steady improvement rather than a flash in the pan; 3 consecutive 2nd place UFPL finishes, two ACL playoff appearances, followed by their debut in the group stage last year. It’s been a gradual culture change in Uzbekistan also, long gone are the days where the country’s top players only went to Tashkent’s big two in Pakhtakor or Bunyodkor, Loko are now attracting players from up and down the league, including those from their capital rivals. Tempting back the likes of Timur Kapadze, Jasur Hasanov alongside returning national team captain Server Djeparov has seen them assemble one of the strongest sides in the league.

Their unbeaten run in Asia has been broadly based on a solid defence, only conceding 4 goals along the way, but they have been clinical when needed in attack. Another former Pakhtakor player Temurkhuja Abdukholikov is the form striker at home and abroad with 10 goals so far over both competitions, while national team defender Islom Tukhtahujaev proved his worth in the opposition’s box with the opener against Hilal. Both goals came directly off Djeparov’s delivery, but it would be a disservice to assume his return home was the sole factor in their season's rise, instead it’s been the final piece of the puzzle which could see Loko steamroll their way through to the final.

This season as a whole has had a sense of changing the guard about it, with the established order struggling to compete with inexperienced but well organised so-called smaller sides. From Guangzhou Evergrande’s “shock” group no show, to Al-Hilal and Lekhwiya’s unexpected exits this week it hasn’t been an easy season for the likely lads especially in the West. Underdog tales including the attacking vibrancy of El Jaish, the assembled team ethic of Lokomotiv and the youthful dynamism of Zob Ahan have thoroughly leveled the playing field, leaving only one usual suspect on that side of the draw in Al Ain.


This of course is a steady leveling that has been occurring regularly over recent seasons, the demise of Tehran giants Esteghlal and Persepolis has seen them both miss out on ACL football in recent seasons, while despite the high profile signing of Xavi, Al Sadd continue to struggle to find any sort of consistency. Elsewhere Al-Ahli Dubai languished in mid-table last term, unable to retain their West ACL title this term. Going forward to next season’s competition, the new/returning names of Al Rayyan of Qatar and Esteghlal Khuzestan of Iran are set to offer yet another dimension to the tournament.

The reasons behind the turn in fortunes differ from country to country, ranging from off the pitch financial struggles to on the pitch tactical naivety. The Asian game even up to very recently was a closed shop when in came to preparation and coverage, widening the competition to a global audience has enabled those astute enough to use tactics to their advantage, as Zob Ahan illustrated this year, a team made up of promising youngsters rather than seasoned professionals, can take advantage of the usual elite. In an enclosed state, the product continues to improve as a spectacle, as predicting a winner year on year becomes more and more difficult. Whether a lack of consistency in quality of some squads may prove detrimental when we go further down the line in West v East encounters and Club World Cup competitions, we'll possibly see as soon as later on this year.